With the opening of the much-anticipated Mines Market in the Elm Hall, Mines Dining has supposedly stepped into a new age of superior dining services with Sodexo at the helm. Despite these recent improvements, many in the student body cannot help but think things have gotten much worse. Along with the new eatery is an entirely restructured set of hours for the popular Digger Den grab and go food court. 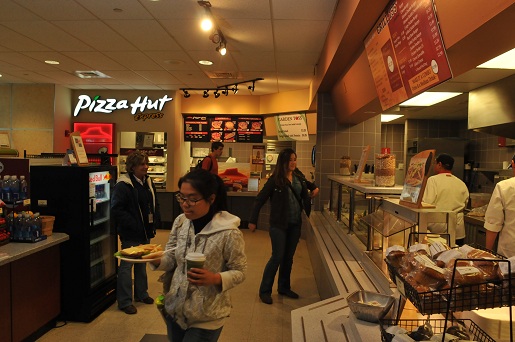 Digger Den, which was once open as late as midnight on weekdays, is now only open until 7:00 PM with Mines Market taking over after that point until midnight on weekdays. In lieu of the old late night Digger Den menu, Mines Market now offers a short buffet menu of pizza, cereal, drinks, a random entree, and the necessary conveniences for those with dietary restrictions. Generally speaking, Mines Market’s lack of options and increased cost, especially for those not possessing an unlimited access meal plan, has thrown many late night Digger Den customers into an uproar. After attending a recent meeting between Mines Dining Services and concerned students, the problems and potential solutions became apparent.

After the new Mines Market was opened and the initial excitement had worn off, many students were quick to note that their favorite late night “hotspot,” Digger Den, had been closed and replaced with the new Mines Market eatery. Not only was the popular hangout closed after 7:00 PM, but it also had been substituted with a more expensive and less diverse selection. After 8:00 PM, Mines Market offers only a limited menu. In response to student complaints, Mines Dining Services recently expanded these options to include salads, desserts, sandwiches, pizza, side dishes, and rotating entree specials. However, the options at Mines Market are still more limited than the options previously offered at Digger Den which included multiple entree options on its menu in addition to à la carte items (e.g. naked juice, energy drinks, candy bars, etc.). The reduction in options is also accompanied by an increased dining cost. For individuals without a meal plan, just getting into Mines Market costs upwards of $10, regardless of how much (or little) food you eat.

In response to the latest uproar one must be quick to note that Sodexo has not only called meetings in an effort to learn the opinions of the student body, but also made efforts to appease the dissenters through policy changes. For instance, when Mines Market first opened, the to-go option previously available at Slate had been removed. This angered many students, but Mines Dining Services quickly responded by reinstating this option. Furthermore, they have been working hard to increase the diversity of late-night options offered by Mines Market and have recently introduced à la carte options. However, while they are making efforts to rectify the apparent fault, they are quick to defend their position. Mines Dining Services points out that the current plan capitalizes on making the food services at Mines more efficient for both its customers and its employees through better management of meal plans. From the perspective of Dining Services, Mines Market is a brand new facility that has the ability to seat and serve many more students than the terribly cramped, overburdened Digger Den, creating a superior eating environment for late night eaters.

Even with these improvements however, it is undeniably clear that the students have received a significant and unexpected downgrade in food services from Digger Den to Mines Market, albeit with more space to enjoy it in. Dining Services clearly realizes this to some extent and seems to be trying to rectify the situation with stopgap measures, but it is unclear whether or not the predominating interest here is students’ well being or a bottom-line profit margin for Sodexo and Mines Dining Services.

The solution here is clear: Digger Den’s late-night hours should be reinstated and if necessary, Mines Market’s should be decreased. Current Mines students have already paid for their meal plans and have grown accustomed to the options offered during the first semester. Any new dining structures should be introduced at the beginning of the next academic year. Unfortunately, Dining Services seems very reluctant to revert recent changes. At the very least though, Dining Services should give the new Mines Market more selection and more efficient price to product selection. While they have taken steps on the first issue, they have yet to introduce a reasonable pricing scheme for the average Mines student.